Which is the better choice – solar energy or a generator?

Perhaps we are setup for solar energy versus generator..?

The discussion and concerns about changes to the environment continue to be serious topics for debate and people across the world are beginning to consider their energy generation options much more seriously.

Of course these solutions to electricity generation may not be suitable for everyone and a home based solar power system or similar may not fulfil energy requirements.

In some off grid solar cases home owners may already be using more traditional petrol or diesel based generators to meet energy needs, back ups, and for emergency electrical power.

Many people who live in remote locations, with no utility connections have relied on generators for their electricity. However a re-think here may help not only mother nature but could also help to save money.

In the past there were few options available to replace generators however nowadays we have a choice, solar power versus generators.

Over the course of a lifetime a solar powered system will be cheaper than a generator.

Initially the outlay for a home based solar power setup will be more than the price of a generator and this is probably the key reason that many people choose to use a generator for electricity rather than a solar panel option.

However to get a full picture it is better to consider the lifetime or long term cost of both prior to making a decision and getting a full comparison of solar power versus generator.

The cost of solar power versus generator is much less over the long term.

Solar Power versus Generator – Ease Of Use

When looking at the benefits of solar power versus generator it is important to also consider the convenience and ease of use of both systems.

Solar Power versus Generator – Which is best for efficiency

When comparing solar power versus generator its also a good idea to look at efficiency factors. too. Which is more cost-effective?

The electricity is ready for use when needed, and, for a system with batteries, in times of reduced usage, the power remains in storage.

It is also worth looking at the reliability of the two systems:

* Solar power is reliable and operates constantly in daylight. In areas of high sunshine solar can and will produce significant levels of power consistently. When used in areas with less sunlight, or during cloudy or overcast conditions, solar power will be less effective. The system will continue to provide power however as it simply requires light – the amount of power varies according to the intensity of the light levels. Even so, solar power systems are in wide use in areas of northern Europe and are very popular with many homes and businesses using solar. The proliferation of solar farms in the United Kingdom is indication that solar is effective and reliable, even in areas that have more rain than sun!

* Generators are generally reliable. But they can break and fail and some can be difficult to start. They are reliant on fuel and if they run out then you have no power at all.

Both solar power and generators have an impact upon the environment. In the case of solar the panels and components need to be manufactured and transported and installed – this is the prime aspect of solar’s impact on mother nature.

Generators also need to be manufactured, transported and installed.

Solar Power versus Generator – Moving on

Home energy production can learn from the world of electric vehicles. The concept of green energy is great but clearly cannot meet the demands of everyone. Many electric vehicle manufacturers produce hybrid style vehicles that use electric power and engine backup.

This is a concept for the home. A hybrid solar based system that contains back up generators for use when weather conditons impact solar output.

If combined with battery based storage and backup then this type of system should be able yto cope with most peoples’ energy demands while reducing environmental impacts.

A modern, well serviced generator, linked to a solar panel system, with a bank of deep cycle batteries will provide reliable, safe and useable energy for many years.

Running an RV or camper can be an expensive experience. As an RV owner or user you’ll know that it’s rarely cheap to keep your

How To Fit Solar Panel To Motorhome 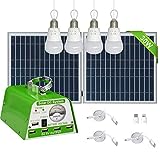 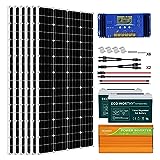